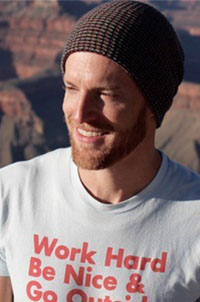 A pharmacist by degree, Chad Hildebrand worked in conventional medical marketing for many years.  Several years ago, recognizing that he was not personally satisfied or stimulated by the work he was doing, Chad began to search for a more meaningful career.  He was drawn to Integrative healthcare and consequently ended up applying for Leadership Program in Integrative Healthcare at Duke.  After graduating with Cohort II, Chad created Remedy Hike.

He chose World Environment Day, an initiative of the United Nations (UN), to launch his company. When the UN found out about Remedy Hike, they featured it on their website in a story titled, “Hiking for Health: Connecting People with Nature and Each Other.”

Living in Santa Monica, CA, Chad was familiar with The Santa Monica Wellbeing Project, which was funded by the Bloomberg Foundation.  That study found that 52 percent of residents do not engage in any form of daily physical activity despite having a massive natural playground on their doorstep. Only 55 percent spend leisure time outside at least once a week and one third reported being stressed all or most of the time. Not surprisingly, Santa Monica residents also have relatively low levels of social interaction.

Through Remedy Hike, Chad aims to improve these numbers by pairing individuals seeking health and wellness advice with integrative health educators from their local community on a series of friendly group hikes that take place a few times each week. These educational hikes will be made available to everyone, regardless of social status, which aligns with Remedy Hike’s legally defined goals as a Benefit Corporation. In keeping with its mission, a donation based model was established so that participants donate whatever amount that are able to pay. In hopes of ensuring the widest possible reach within the community, ten percent of proceeds will be given to Integrative Medicine Access, a non-profit that facilitates accessibility to integrative healthcare among low-income and medically underserved people.